Celebration of the Day of the Social Economy of Navarrea 2021 organized by EINA and REAS.

CEPES Navarre, the confederation that groups together the different Social Economy families, celebrated its Day in Pamplona at a meeting hosted by REAS Navarre, the Alternative and Solidarity, Social Economy Network and EINA, the Association of Social Integration Enterprises of Navarre.

Good Practices of the different Social Economy families during the COVID crisis were presented at the meeting and recognition was given for their commitment to social responsibility to the Baztán City Council and the Department of Social Rights of the Government of Navarre. 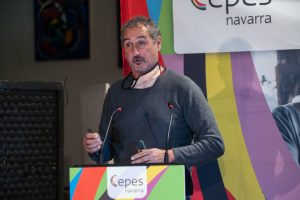 The Department of Social Rights of the Government of Navarre and the City Council of Baztan were recognized this Tuesday as ‘Socially Responsible Entities’. The delivery of these awards took place during the celebration of the Social Economy Day and was made by the president of the Social Insertion Enterprises Association of Navarre (EINA) Juan Cruz Arguiñariz and the secretary of the Special Employment Centers of Social Initiative (CEISNA) , Javier Jimeno.

In this way, both entities wanted to thank them for having exceeded the minimum reserve of 6% established by law for hiring people from Special Employment Centers (SEC) and Social Insertion Enterprises (SIE). In the case of the tenders carried out by Baztan, in the last year they amounted to 1.27 million euros, which represented a reserve percentage of 28%.

By type of contract, gardening represented 40% of the services provided by SEC and SIE. The second activity was transport and logistics (15.54%), followed by cleaning, maintenance, laundry, masonry and works, advertising, printing or catering. The sixteen SIEs benefited from all of them, which currently employ 214 people, as well as the other eight SEC, which employ more than 2,000 people with some type of disability.

In view of these numbers, the Counsellor of Social Rights, Carmen Maeztu, valued the important role that the Social Economy plays in the region. She recalled, in this sense, that she brings together 1,250 companies, which invoice 2,400 million euros and employ about 20,000 people, 8.5% of private employment. For all this, she considered that “Navarre is today the European region of reference in this matter for implementation, results, innovation and for public policies to support the Social Economy.”

She also highlighted the speed with which all these milestones have been achieved. “Barely a decade has passed since the entry into force of the Social Economy Law, which was undoubtedly a before and after in terms of its recognition and visibility.” And I am confident in “the bet for the future” represented by a II Comprehensive Social Economy Plan, which contemplates a public investment of 37.5 million euros, as well as the creation of more than 360 companies and 4,000 jobs.

The first assured that the changes that are taking place “are structural” and that they bring with them “global challenges with a strong local impact.” “As a society, we have to consider where we want to go because achievements are as important as how to achieve them,” he emphasized. For this reason, he urged “not to leave people behind” and to guarantee “decent, stable and inclusive employment.”

For his part, Martón defended the need to reserve contracts in the public sector. A resource that, from his point of view, “promotes social cohesion through the socio-labor integration of the most vulnerable people and those with the greatest difficulties in accessing or staying in the labor market.”

Video summary of the day:

By continuing to use the site, you agree to the use of cookies. More information